A first look at the Smartivity Pinball Machine

If you are sentimental about the good old days of pinball machines, despair no more! Elenco has created this amazing machine that brings back great memories while teaching your children some basic engineering concepts. 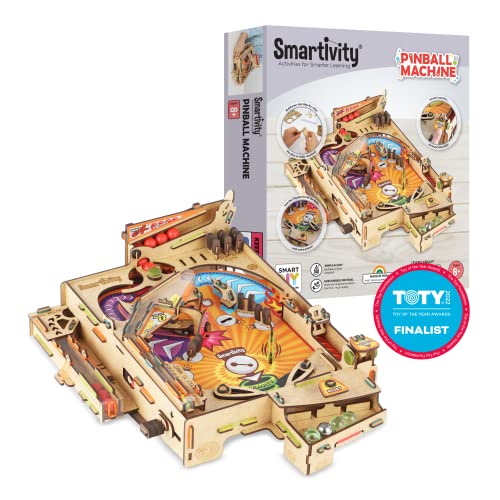 The kit features a simple playfield with two flippers and ramps that allow players to control the ball in different ways. It also comes with a small LED display that shows information like score, current level, and time remaining on each round.

In contrast to your classic arcade machine from the 1980s, the Smartivity Pinball Machine is made from laser-cut, wooden pieces and painted using water-based paints. This eco-friendly combination of recyclable materials makes for a hands-on STEM toy for little engineers to assemble.

The pinball machine looks as cool as it plays: The bright colors make it easy to see what’s happening on the game board, and the design is reminiscent of classic pinballs from the 80s.

Charles Fey invented pinball games in 1887. He was inspired by his childhood experiences playing marbles and billiards.

In 1907, William Stern introduced the first automatic pinball machine. His invention earned him $10,000.

The first pinball machine was called “The Great American Game” because it featured all kinds of challenges, including shooting targets, bowling alley lanes, and car races.

There are over 200 million pinball machines worldwide.

Since the introduction of electronic gaming devices, fewer people have played pinball.

Construction time should be around 180 minutes – just enough to learn about levers, energy transfer, and momentum without even knowing it! You may want to stick around while the kids build their machines to provide assistance or support.

Nice detail: rubber bands are used instead of glue to hold pieces in place.

Make sure to check out this easy video tutorial for tips on how to build this awesome pinball machine.

Not only does this Pinball construction kit offer hours of fun building it, the actual playability afterward is infinite. Kids can launch their pinball with the included marbles into the flipper panels, use the ramps to propel the ball up and down the playfield, and even use the LEDs to guide them through a maze of levels.

Using the levers on the side of the machine, players can adjust the height of the ramps to reach higher or lower parts of the playfield. They can also change the angle of the ramps to direct the ball in any direction.

With the inclusion of vaults and various slots on the pinball board, there are ways to make the track harder.

Kids can play alone or compete against other builders.

This construction kit is designed to help teach kids about safety while playing pinball. For example, when the ball hits the ramp, it rolls down to the bottom of the ramp, which prevents the ball from rolling off the table. The ramps also stop the ball from going too far. If the ball goes past the end of the playfield, it falls onto the floor below.

There are also safety features built into the playfield itself. When the ball reaches the top of the playfield, there is a sensor that stops the ball from falling back down. And if the ball gets stuck between the playfield and the wall, it will slide out easily.

This is a must-have toy for any engineer or gamer who wants to have fun playing pinball but still learn something along the way.

Pinball is a great way to introduce engineering concepts such as levers, gears, springs, and pulleys. With the Smartivity Pinball Machine, you get to combine those concepts with a lot of fun.

This kit is ideal for younger kids ages eight and up but could be adapted for older children too if supervision is provided.