The game is the successor of the original game “Break In: Alcatraz,” which first introduced the break-in concept to the board game market in 2020.

In” Break In,” you and your fellow aliens are trying to rescue your ship that was stolen by humans and is being dismantled deep inside the facility. The game is played on a board with a modular design, which allows for many different layouts. There are numerous cardboard chits, tokens, and tiles that make up the gameplay.

Instead of a getting-out situation, this game stages a getting-in situation. To find your ship and rescue it, you must get past the outer perimeter, then into the inner containment zone (where your ship was last seen).

You’ll need to dodge security patrols and evade capture by base personnel while searching for clues that might lead you to your ship. And once you’re in? Be sure you keep the knife at hand because things get dicey in the later parts of the game.

The game is interesting and has good replay value, as the layout of the board can be different every time you play. The artwork is also quite nice and gives the game a sci-fi feel. That said, it can be a bit complicated for younger players, and it’s not the easiest game to set up.

Between Break In’s unique concept and the numerous ways in which the game can be played (including a cooperative mode), it’s a title that offers plenty of re-playability. The game is well-made and comes with high-quality components, making it a great value for the price.

The puzzles in the game were challenging and the solution sticks you insert into the walls to see if you’ve solved certain puzzles correctly were cool.

In addition, we used the hints a couple of times. So we’re happy that they’re included, or else we’d have gotten frustrated.

Is this a game for the whole family?

“Break In” can be enjoyed solo or by the whole family.

It’s important to keep in mind that the game is best suited for players 12 years and up. Younger children may have trouble understanding the rules and concepts behind the game, and because of its complexity, there will likely be some confusion about what exactly needs to happen next.

This is why it’s good to be able to capitalize on the different ways a team of players thinks. There may be puzzles or challenges that stump some players, while they are clearly obvious to others. It’s also nice to have someone with whom to bounce ideas off or to talk about different solutions to a problem.

Ultimately, it took us just over two hours to reach our final goal and we all had fun doing it — a great way to spend an evening together.

Because of its nature as an escape room-style game, the replay value is rather limited. However, if you like the idea of playing through again after all the pieces have been collected, then “Break In: Area 51” is definitely worth picking up.

The fact that you’re peeling back the sides of the game box makes it much easier to snap them together again to reset the game.

Overall, “Break In: Area 51” is an enjoyable game for players who like a bit of challenge. If you’re looking for something that’s going to test your problem-solving skills, then “Break In” is definitely worth checking out. We rate it 4 out of 5 stars. 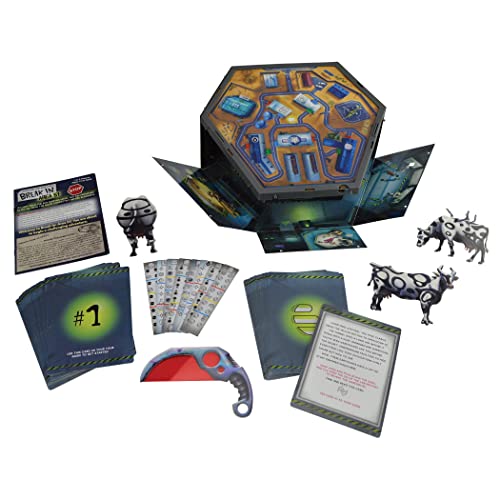